Look out! Keep your eyes peeled when travelling along the Sagavägen Road, as the region is not only inhabited by humans: there are elves, trolls and other spirits dwelling in the forests and mountains. The road will take you through communities that all have mystical tales derived from traditional Swedish, Norwegian or Sami folklore about mythical creatures.

The tales of the Helgeland mountains
The remarkable formations of the mountains have given rise to a number of myths. According to one, it was the arrow from the Hestemannen’s (Horseman) bow that made the hole in Torghatten. One evening, the Hestemannen saw the De syv søstre (Seven Sisters) and Lekamøya (an outcrop of rock resembling a woman bearing a head scarf) bathing in the lake at Landego. He was immediately filled with desire for Lekamøya and decided to kidknap her at midnight. Taking up his weapons and donning his cloak he rode south, but his intentions were discovered by the Jungfruarna (Maidens) who chased him until they became exhausted J and threw themselves down at Alstahaug. Only Lekamøya was able to continue the flight southward, with her pursuit watched by the King of Sømnafjellen. As the golden approach of day grew ever stronger the disappointed suitor placed an arrow in his bow and let it fly. However the watching King threw his hat into its path, thus saving Lekamøya. The hat fell to the ground at Torgar, just as the sun rose over the horizon and was instantly turned to stone…

When you drive along Sagavägen, you must look out because you are driving through a region populated not only by people. Here there are also goblins, Stalos, giants and other beings that you can see if you look really carefully. Sagavägen takes you on an exciting journey full of adventure, stories and legends. Here tales are told about giants and trolls, elves, lake monsters and robbers – all of them linked to local Swedish, Norwegian and Sami folklore. 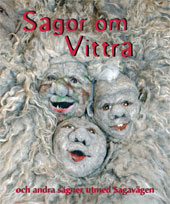 Folk-tales
You can find excerpts from some of Sagavägen’s folk-tales and legends here on our homepage. If you would like to be further enchanted and maybe frightened a little, you can buy the amply illustrated storybook “Folk-tales about goblins and other legends told along Sagavägen”, available from local traders, hotels and tourist offices in the region. You can also order the book here. The book contains 18 stories based on local tales with imaginative pictures of the beings that live along Sagavägen. (The book is currently available only in Norwegian and Swedish)
To the folk-tales 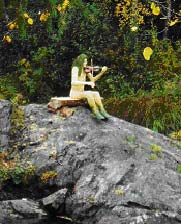 Folk-tale walks
Along Sagavägen, there are picnic areas created to whet the imagination of both adults and children, places that bring the folk-tales and legends of the region alive. Follow the folk-tale walks and let the stories come alive through paintings, sculptures and texts. Don’t be surprised if you see the water spirit “Näcken” playing by a brook near the road or goblins dancing at the edge of the forest. Look at the map to see where the folk-tale walks are located and visit our gallery for more pictures.
To the gallery
To the map 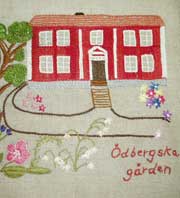 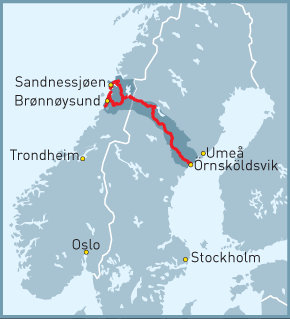